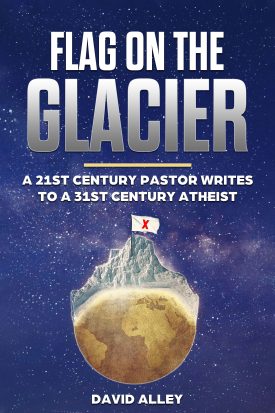 Flag on the Glacier – Available Mar 1

This book is a letter written a thousand years into the future… to atheists.  In the future, the majority of atheists have accepted that there is a God of some type.  The battle between science and religion is over.  In the 31st century, it is now sensible to believe in God, but despite that, issues remain.  Tomorrow’s atheist will have a very different and most significant matter to wrestle with.  This letter anticipates that battle, and uses history that hasn’t happened yet to make an argument.

There is something bigger and better at work in history.  This letter to the future moves beyond the many doomsday scenarios, and points out a few things that so far, seem to not have been observed.  There are cultural and societal trends working to change humanity, but those are temporary and have short term effects.  Yet there is a monumental process, bigger than those spoken of in the media, which rides above the others.  There is a slow and almost imperceptible change taking the world over, moving like a glacier, but surely moving.  This book is a flag planted on that big and slow glacier, so that readers in the future can measure the change and see what is happening around them.

In the meanwhile, climate change is a thing, but it also isn’t a thing.

And Jesus isn’t coming back for a long long, long long long, time.  That is what makes a letter like this possible.

The books needs to be read in a thousand years to be truly appreciated.